Round 'ere you see a fellow on the side of the road with a rifle, your first thought is "I wonder if he's after a varmit or game?"
Round 'ere you see someone walking down the road you slow down to see if they need ya.
Round 'ere stopping by the feed store in the evening can be like a class reunion or family reunion.
Round 'ere the boy in the feed room is more likely to know what you need today than you are.
Round 'ere more folks still drive over to ask you a question than to call you on the phone or text you.
Round 'ere if you are short at the checkout, that's okay....they know where you live.
Round 'ere more people opt for taking their vacation days to coincide with the Jasper trail ride than any holiday.
Round 'ere the azalea, the redbud, the dogwood and the dew berries are all in bloom.
Round 'ere there is a yellow/green blanket on everything that stands still more than 30 minutes....it's called pine pollen.
Round 'ere people at the checkout keep you up to date on what others in your house have purchased so you don't duplicate yourself or run out.
Round 'ere ain't no such thing as a set supper time.  It's just as soon as everyone gets inside after dark.
Round 'ere even the youngsters recognize a load of crap when they see it or hear it.  Especially if it is something contrary to the Bible.
Round 'ere if you ain't got one you can borrow mine.
Round 'ere is the ain't quite the same as any where else.  It may be to your taste and then again it may not.  But it's where I think I'll stay till they plant me in my plot.
Barbara
Tags: azeala, dogwood, redbud, dewberries, Jasper Trail Ride
aoljurlAdd, aoljurlAdd_2
19 comments: 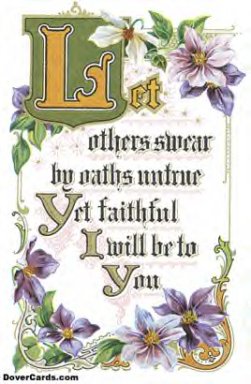 I've Got a Name

I liked Krissy's question today and wanted to play along.  The question is:

What does your first name mean?   (And she even gives a link where you can check it out;  Behind the Name.

Well I found out a long time ago that Barbara meant "foreign or strange."  And I thought, "Oh, lovely!  NOT!"  Why couldn't it have a romantic or beautiful meaning?

But I resigned myself to be happy I shared Barbara Eden's name.  After all, she was Jeannie and I grew up in the 60's watching her.  Still, such a serious sounding meaning is hard for a young girl to accept.  Then my family always called me Barbie.  Well, what's that?  An air-headed doll.  LOL  So I have serious on one hand and frivolous on the other.

As time has marched on, I have become content with both.  And they both fit.  I've always been the easy to get A's person.  The take it serious person.  The deeply committed person.  The care deeply person.  And I have always had a wild and adventurous side.  A wit and sarcasm side.  No doubt, many do find me very strange and completely foreign.  More so the older I get.

So now I wear my name with pride!  Go ahead and try to figure me out; I love confuseling folks.  ;o) 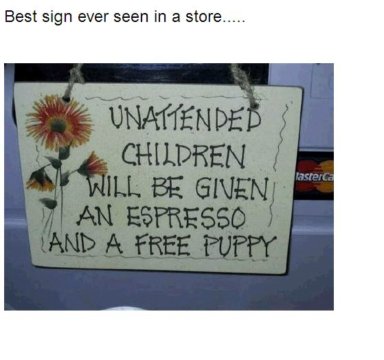 Someone sent me an email that had the above photo in it.  I got a real kick out of it.  That should be a sure fire way to get a parent to mind a child.  And if they don't, well, they'll be paying for it for a while!

Gorgeous day here today!  And a good one for the most part.  I remembered the time change Friday.  But totally forgot it on Saturday.  So this morning I was drinking my coffee and reading emails when I thought it must be about time for Bug and I to dress for church.  I looked down at the clock on the PC and thought "Oh, boy!  Time change!"  So needless to say we didn't even try to go as services were surely already started.

Pete spent the day helping his nephew work on his Toyota.  Cooked a little sausage and boudain on the small pit for snacking.

Bubba covorted with a friend and put some chrome tips on his exhaust.  Finally has that sound he's been after on his truck.

Bug tried all day to get ahold of a friend to come and play, but allas, they were gone somewhere.  So she piddled on her own, complained a lot and got me to play some Yatzee and cards with her.

Me?  Oh, I relaxed mainly.  Read journals.  Did a little laundry.

Now tonight the temperature is dropping fast.  We're all settled in the house and have chili dogs.  I made chili last night.  Figured to get by easy again by recycling it as chili dogs.  No complaints around here though.  Everyone seems to be stuck on chili.  Can't seem to get enough of the stuff.

Pete and I have an anniversary looming ahead of us this week.  I plan to, hope to get a special entry done and posted by then.  Not so much a me and he thing.  More of an ode to a man I really admire.  'Cept for when I want to kill him.  ;o)

Take care and stay connected to the Source!

Thanks to Carolyn for pointing out to me that the Houston Chronicle has moved on to more pressing election coverage and my link in the previous entry doesn't get you to the questions and answers.

I did go into the archives and find links to some of the questions answered by some of the candidates.  Why all questions and answers are not still available, I don't know.

So, if any one is courious and didn't get to see before, try these two links:

I must confess, I was starting to wonder if all the candidates would respond and if the questions and answers would ever get posted.  But today, the Houston Chronicle has the questions that were submitted to the candidates and responses from each one posted on their Politics page! Each party has it's own link, so that you can review your candidates answers side by side.  Go on, check it out!  I know you're curious.  Click Here.

Unfortunately, only one of my questions made it all the way through.  But hey, when was the last time I was ever able to ask anyone else running for president a question.  So I won't complain.  I will share with you all my question I had hoped most to have answered.  I like to "get a feel for the person" if at all possible.  Not just where they stand today on the issues.  Everyone always changes their stance on some issues over time.  And new things are all ways appearing as prime issues.  Therefore I think a peek into who they are is helpful.

This is the question I would have really loved to have read the answers to:

If I had been a friend of yours from the time you were eight years old until today, what is something I would know about your personality, or you as a person, that doesn't come through all the campaign rhetoric?

Playing along with Krissy this morning!  Here's the question:

What is the weirdest food you've ever eaten?

And here's my answer:  I may have eaten a lot of things some folks would find weird.  Crawfish, boudain, cracklins', gar balls.  But those things aren't really weird.  Not for the place I live anyways.

Back when I was in school, my cousin and his family were down from Arkansas.  He was a Deputy there at the time.  Seems a bear had been killed.  Not sure of the circumstances, but cousin had a large amount of bear meat with him.  The family had a huge Bar-B-Que of bear.  Not bad at all.

And then once when visiting Pete's dad when he was camped on the Neches River, I went in the camper and found a large pot of dumplings.  Helped my plate.  Took a bite of dumpling.  Heard him telling Pete how he'd shot some crows....and then how they ended up in his pot, for dumplings!  I put the rest back in the pot.

Can't We Just Get Back to Normal?! 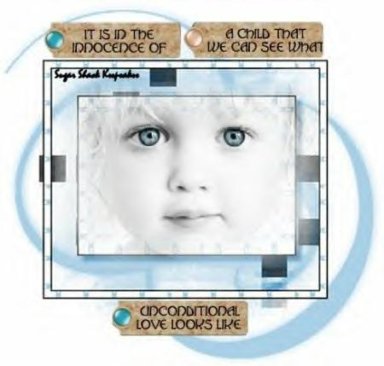 I really don't know what's up with folks.  This past week nothing has been normal in our neck of the woods.

First, there was some clown mooning and exposing himself in an elderly neighbors yard.

Then there was another neighbors truck (which was on four flats) stolen out of his yard in broad daylight.

Then I come home one evening to find the underbrush in the curve burning.  No one around and the winds at a very high pitch.

Someone is running amuck!  All of this in the space of one week.

In other matters, Mr. Robison's last update to me said that two candidates has responded to the questions from the bloggers, and two had not.  They are trying to wait and get a response from all camps.  But Tuesday is right around the corner.

Meanwhile everyone and their spouse has been stopping in little ol' Beaumont to stump.  Not sure what it's getting them or gaining them.  I might be impressed if one of them solved the mystery of the goings on around here.

And on the lighter and delightful side; the pear trees and peach trees are blooming.  The fig trees are budding.  We've had lovely spring like weather all weekend that prompted me to sleep until 2:00pm on Saturday.  I think it is pollen related.  Mama used to call it spring fever.

Being true to herself, Texas is going to swing back to the cold side tomorrow with a high of 73 and plunging back to the mid 30's by tomorrow night.  When you dress for work, think layers.  Mix and match layers.  One trip to the ladies room and you can adjust for anything.

I plan not to be such a stranger this month.  But you know about the best laid plans of mice and men.  And silly old women.  ;o)

Because you asked, here's the recipe for the fudge I made my youngins for Valentines.

In a heavy 2 qt sauce pan mix sugar and cocoa until thouroughly blended.  Stir in milk and corn syrup.  Heat over medium until all disolved and starts to boil.  Cook to the soft ball stage.  (drop a little in cold water and see if you can roll into a soft ball).  Remove from heat and add butter and peanut butter without stirring. Let cool a few minutes.  Then stir in vanilla and beat until it thickens and begins to lose it's gloss.  Pour into a buttered plate.  Let cool.

You can stir in 1/2 cup broken pecans or walnuts at the end of the beating time if you like.  You can make peanut butter fudge by omiting the cocoa and adding another Tablespoon of  peanut butter.