For the East Coast

I remember one of the last things to get through to me before the power went out as Rita approached, was a Hurricane Prayer, sent to me by my friend and sister in Christ, Trish.  It helped me stay calm and rest my mind in spite of the chilling forecast I had read moments before receiving it.

I hope it will give comfort to some soul facing Hurricane Sandy as she is approaching the eastern seaboard.

O God, Master of this passing world, hear the humble voices of your children. The Sea of Galilee obeyed your order and returned to its former quietude; you are still the Master of land and sea. We live in the shadow of a danger over which we have no control. The Gulf, like a provoked and angry giant, can awake from its seeming lethargy, over step its conventional boundaries, invade our land and spread chaos and disaster. During this hurricane season, we turn to You, O loving Father. Spare us from past tragedies whose memories are still so vivid and whose wounds seem to refuse to heal with the passing of time. Father, all the elements of nature obey your command. Calm the storms and hurricanes that threaten us and turn our fear of your power into praise of your goodness. Grant this through our Lord Jesus Christ, Your Son, who lives and reigns with you and the Holy Spirit, one God, forever and ever. Father God I am so very grateful that You are all knowing and all things have to submit to You. I pray Lord God for mercy for these in the hurricane areas. Father I pray that we as a nation of people will once again turn to You and say You are God! Father I pray for good to come out of all this devastation. I pray for souls to be saved, I pray for spiritual health of this nation and the world. I pray we will lift Your name on high and put Jesus back on the throne instead of all our other gods we have tried to put on His throne. May our people and our nation be healed and back under Your protection Father God. In Jesus name. I pray we completely surrender to You and spare ourselves from more destruction. Amen!

This prayer and a record of our experiences through the storm and initial aftermath are recorded in my blog:  Storm Stories:  In the Path of Rita.

You'd never in a million years guess where this little lady spent her Thursday evening. So I suppose I'll have to tell you: at the Beaumont Chamber of Commerce's biggest event of the year, the Spindletop Awards. 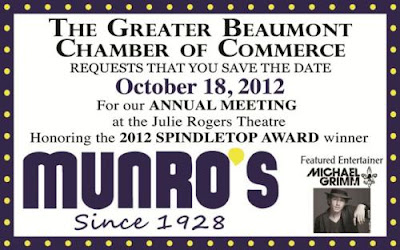 So you are wondering how a person gets from Caneyhead to an event like that? Take 92 south, then 96...oh, no. Sorry. You didn't mean directions. You meant social status wise.


The family owned company I work for won the Spindletop Award. Munro's started as a dry-cleaning company in 1928. There is a wonderful old photo in our community room that has businessmen in their boxer shorts practicing their golf swing outside the original building with a sign posted that says something about free golf while you wait for your pants to be pressed! I love it.


Now there are three divisions ran by the 3rd generation of Munros with the 4th wading in to get their feet wet to one day take over.


The original Dry Cleaning is now accompanied by Safety Apparel and Uniform Services...which I work for. You'd think rental of uniforms to companies for their employees would be a simple affair. It is nothing but. I have worked in the lumber industry, traffic and oil & gas, yet none had the level of detail involved as eleven sets of clothes per man.


But I've drifted away from your original inquiry; how'd I end up at such an affair? Well, our boss, Chad (best boss ever) invited and handed out tickets to all his ladies in the office, among many others. Pete was afraid he'd get too tired or sick feeling so he begged off going with me. So, I immediately thought of my sister, Edna, who is always up for anything. Besides, we have a blast together no matter what we do.


The evening started with a VIP Reception for the Chamber at the Beaumont Civic Center. We were served horse doves...just joking. I know they were hors d'oeuvres, after all I took 4 years of French in high school. And drinks. With a private gathering for the winners down the hall. Afterward,everyone headed across the street to the historic Julie Rogers Theater for the Awards ceremony. Nice little historical film piece about the family Munro and their business. And of course there was the actual presentation of the award.


By the way, my hat is off to those who renovated the Julie Rogers after Hurricane Rita! I was there about 15 years ago and it was nice, but rather plain. Now it is ornate & beautiful! 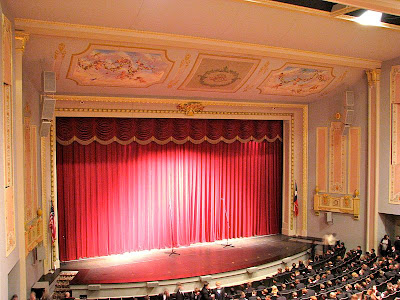 Then it was time for the entertainment of the evening: Michael Grimm, 2010 winner of American Idol. Now I have a question for that young man....how'd you get my playlist? Seriously, every artist he covered is on one of my playlists. There was Muddy Waters, Otis Redding, CCR and Bob Seger to name a few. He did excellent vocals for all of them. Some you couldn't have told if it were Grimm live or the original artist on Memorex. Others he stylized his own unique way. But every one was awesome!


He did a couple of duets with each of his back up singers, both of which was very good. But the second girl tickled us all with her antics on stage and her vocal playing. He also did an awesome song he simply said was an original, called "I Am". Beautiful lyrics that touched your heart, it also show cased his talented voice.


The only problems I found with the show were that the first couple of sets, the music was set so that it was overpowering his voice. That got adjusted to a perfect blend. It may be because I am "old" and wear glasses, but I did not care for the lights they would shine out over the audience. They blinded me and I wanted to see it all. He played guitar for himself and did quite well with it. But having had the privilege of hearing local boy, Glen Gordon play his guitar on numerous occasions, God rest his soul, Grimm's guitar solos, while pleasant, didn't excite me.


I thought it spoke well of him that after the show, he walked to the edge of the stage and shook hands with the front row, which included the Munro family and their closest friends. Proved he has manners.


Overall, it was an excellent show that was well worth attending. If you care at all for those styles of music, or for gritty vocals, you have to catch him when you have the opportunity.
6 comments:

I did this interview for our church's online bulletin, but I figured there'd be fellow bloggers interested in reading it as well.  Many of you may have read his wonderful Christian Cowboy Poetry.  Go on over and take a look. ;o)


Wiley Mae Community Baptist Church: Interview With Author Jeff Hildebrandt: Jeff Hildebrandt I stumbled across a fellow blogger, a couple of years ago, who writes some wonderful Christian Cowboy Poetry and posts...
1 comment:

No, I haven't stopped blogging

I've simply been busy as a bee the past month or so.  It started with my birthday weekend (Labor Day weekend).  My sister, Edna, had the family over for a delicious supper and chocolate pie.  She really can make a crust just as flaky as the one Loretta Lynn used to make in the old Crisco commercials!  Then Bubba and Candy Girl had us down for some fried catfish.  Yum.

Another weekend Saturday was took up by the old fashioned Singing Convention at our church.  Beautiful music, wonderful fellowship and good food.

Then we spent another Saturday off at Artesian Springs near Newton, TX.  And in between everything else I've been working to put our church's bulletin online.  So, I've been otherwise preoccupied.

Do want to ask you all to be in prayer for the situation in Kountze, TX.  If you have missed hearing about it, you can read about it here.  I have posted links to Liberty Institute on both my L & F Facebook page and my @Caneyhead Twitter account.  Links in sidebar.  So far student led demonstrations of their faith have held up in the courts.  Let us keep it this way!

So, now that I've dispelled the rumors that I had moved to a remote tropical island and cut off all communications with the outside world, let me simply assure you I will be around and posting.