A couple of weeks back I did a post that originated from something I saw on Facebook.  I intend to make this a regular feature for the near future here at Life & Faith in Caneyhead.  Today's entry was inspired by the following: 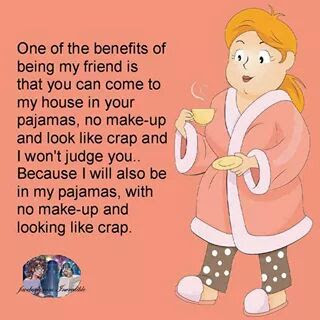 There is a world of truth here!  Monday thru Friday, I come in from work, hit the bedroom kicking my shoes off, then on to the bathroom to toss my clothes in the dirty hamper and I don a gown.  I wear my gown for the rest of the evening.  Cook in it.  Eat in it.  Go outside in it.  (A benefit of being in the woods).

And on weekends...i stay in a gown 99% of the time.  Don't bother with makeup, bras or shoes.  If I must go to a store, I'll slip my old shoes on and some ratty stretch pants and a t-shirt.  The only things that will get me in makeup, my bra and regular clothes on the weekend are:

2.  Pete takes me somewhere other than immediate family.

3.  Someone wants to take me out to eat.

And there you have it.  Another strange factoid about Barbara In Caneyhead.

Fall.  For most of my life fall has far and away been my  most favorite time of year.  Even though I suffer greatly from all the ragweed that blooms.  I love the chill in the air, the smell of leaves, the crunch of them under your feet.  The wind makes me feel alive.

Around here, fall means time to get ready for deer season for many folks.  I have hunted and enjoyed it.  I have hunted and been nothing but miserable.  When we lived on the side of the highway and I worked answering phones all day for Fuller Oil, I loved escaping to deer camp on the weekends.  For the solitude.  No phone.  No electricity.  Just family and friends who'd stop by for coffee or a game of 42.  Coal oil lamps and fires to warm us and cook over.  Now that we live right next to the Baygall, I feel no need to "get away" somewhere.  I am away, as soon as I get home.

And then there is Halloween.  In my childhood, Halloween was one of the happiest times of the year.  Even in my teens.  But by the time I had Bubba, things were changing and now I really don't care a flip for it.  Why you ask?

When I was a child, nine out of ten homes on any street would have their porch light on and give out candy.  You could trick-or-treat in your own neighborhood.  On foot, on bikes, whatever.  It seemed everyone did it from toddler to junior high.  On a warm Halloween, there'd be water balloon fights in the dark.

Our little church would have a Halloween on the sidewalk in front of the Sunday School building.  There'd be booths with actual creepy, scary stuff.  Stick your hand in this bowl and feel the eye balls (peeled grapes).  Or in this one and feel the intestines (cold pasta).

Churches, family or friends would often have a party that included roasting wieners, making smores, dunking for apples, and hay rides.  Nothing like a hay ride.  Out in the night under the stars.  Adventurous for the little ones, romantic for the pre-teens.

Occasionally the hayride would go down Bragg Road. The trees close in on either side of you as you drive down this dirt road.  Part of the era of the railroad.  The story that was told to us as we traveled the road, was that in a tragic accident, an engineer lost his head and the Bragg Light that appears, is him carrying his gas lantern, searching for his head.

In my later teens, me and friend Michele would dress up for Halloween and cruise Silsbee.  One year we were gypsies.  Another one we wore togas.  We had a blast.

In college at SFA, one year me and my roommate dressed up as hookers and went to a Rusty Wier concert at a little club by campus.

When Pete & I married, I'd buy candy and turn our light on.  The first year we had quite a few.  Then next year less and then less.  By the time Bubba was born in 1989, almost no one turned on their porch light anymore.  Due to dwindling numbers of treaters and a trend to pile the kids in cars and descend upon residential cul-de-sacs in mass.  Churches opted for the more politically correct "fall festival" which was fun, but no where near the same.  It was harder and harder to get a group together for a good party.  And many adults seem to have taken over Halloween for themselves.

Our church does a "Trunk or Treat" for Halloween now.  I've been to help,  Pete and his friend Robert take turns being a head on a table.  One year I dressed as the wicked queen off of Snow White.  Left my dentures out and tried to offer the children a fake apple.

But other than that, I'm overall pretty down on Halloween.  Disappointed it's not the same.  But even as I type this, I think perhaps it's time we try to recreate some of the past for   Hannah Bug and her friends and Baby Ruth.

The idea for this entry came from the BESociety October 2014 Blogging Challenge.

What is fall to you?

This is the first of posts in a new series I plan to use titled "I Saw it on Facebook."  In these posts I will display what I saw on Facebook and then expound upon it.  Sometimes it may be a rant, sometimes a memory and other times humorous thoughts.  Tonight, I give you this: 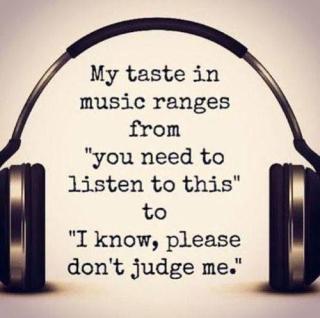 That sums me up rather well.  I have strong feelings about music and strong attachments and repulsions to it.  My taste ranges from Etta James to Hank Williams, Sr.  From Magic! to the Andrews Sisters.  From Gary Stewart to Cookie and the Cupcakes.  From 38 Special to Frankie Valley.  All I ask of music is that I like the music, that the song touch me in some way, and I enjoy listening to the artist on that song.  There are very few people or groups I could listen to a whole album of.  A few off the top of my head:  George Strait, CCR, or the Eagles.

Music brings back memories to me unlike anything except perhaps for smell.  That's why next April I plan to do my Challenge entries based on the theme "Musical Memories".

April is a long way off.  So until then, if you want to see if your taste and mine meet anywhere, you can check out my Spotify playlists.

So what is your favorite type of music?  An artist you can't get enough of?