An old man, a boy and a donkey, were going to town. The boy rode on the donkey and the old man walked.

As they went along they passed some people who remarked it was a shame the old man was walking and the boy was riding.

The man and boy thought maybe the critics were right, so they changed positions.

Then, later, they passed some people who remarked, 'What a shame, he makes that little boy walk.'
So they then decided they'd both walk!

Soon they passed some more people who thought they were stupid to walk when they had a decent donkey to ride.

So, they both rode the donkey.

Now they passed some people who shamed them by saying how awful to put such a load on a poor donkey.

The boy and man figured they were probably right, so they decide to carry the donkey.

As they crossed the bridge, they lost their grip on the animal and he fell into the river and drowned.

The moral of the story?

If you try to please everyone, you might as well... 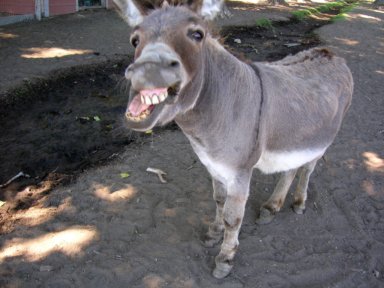 (Found the precious picture on a photobucket public album.)

My friend and long time neighbor, Lloyd, sent me that little joke.  A whole lot of truth wrapped up there.  Makes me think of all the political correctness run amuck these days.  Brings to mind all the musical philosophers that have hit upon this chord.

Like Ricky Nelson said, you can't please everyone so you got to please yourself.  And then there was Aaron Tippon's wise counsel that "you've got to stand for something or you'll fall for anything."  And American Poet Laureate, Merle Haggard, "I take a lot of pride in what I am."

Please folks.  Take wise counsel.  Cover it in prayer.  Decide what is right and best and God's will for you.  Plot a course.  And remain true to it.  Don't blow with the wind.

Geez, louise!  When AOL finally gives you something, they really give it!!  We have asked for more mood choices for how long?!?  And now I come today and find a list so long I can't even make up my mind!!!

Pam, at Almost Forty has bestowed upon me a precious 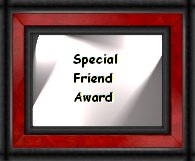 .   I'm flattered.  And would love to pass it on.  But as I was reflecting upon doing that, I couldn't think of anyone who blogs here and comments here that I wouldn't pass it on to.  You have all become very special to me for verious reasons;  kindness, humor, friendship, prayers, information, helpfulness, etc.

And as I considered the dauntless task of naming each one, I was much too fearful I'd leave someone out.  So please, consider youself as special to me!!  And consider yourself awarded!

Want to share with each of you a picture of Blaze's colt.  Bug took this with her disposable camera not long after she was born. 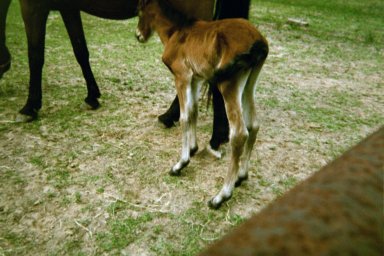 She's filed out now.  And bouncy and happy.  Blaze is super protective of her, after having that still born colt last year.

Bug and her Prissy horse are getting along great.  She's been seperated from her mama now.  She's so calm!  Bug pets and loves all over her.  Looking forward to and dreaming of the day she can ride her.