#Faith - The Word on Words

"They are men of violence and injustice. O my soul stay away from them. May I never be a party to their wicked plans. For in their anger they murdered a man and maimed oxen just for fun. Cursed be their anger, for it is fierce and cruel."
Genesis 49:5-7, TLB

This is Jacob (Israel) speaking of two of his own sons! He was on his deathbed, giving them blessings for their future. These two were so angry and bad that he had not one good word for them. 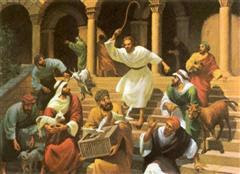 Just to be angry is not sin. You know, Jesus was angry when he cleansed the temple. But we all too often get angry for totally unrighteous reasons. Selfish reasons, that stem from pride.  While Christ's actions driving the animals from the temple and overturning the money changers tables drew criticism from the authorities, in the eyes of God he did nothing wrong.  All too often our anger leads to wrong actions and sin.

Anger left to simmer can lead to violence. Don't keep company with angry people!   At the worst anger can be infectious.  In the least, you can be swept up or harmed by their actions.

My mother's mother, Mama Ruth always said you could judge a lot about a man's character by the way he treated animals. Violence and cruelty are never God's way! We are in the world, but be not of the world.

May God bless each soul that happens this way today!