Throughout most of my lifetime, people could discuss things like issues, beliefs and religion.  They could share points of view.  Sometimes these discussions would be lively and occasionally they would get heated.  But there was no hate involved.  No one disliked the other person afterward or stopped speaking to them.  They simply moved on to other topics or even agreed to disagree.  These past ten years, I've seen that changing, and it is a shame.  All that does is cause division and breed hatred and contempt. 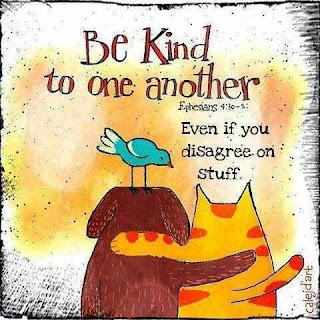 I also have never hated or ridiculed any person for choosing to live a gay lifestyle.  They have that right given to them by God, just as I do.  It's called free will.  Our
Creator  could have chosen to have made us automatons that did and said and thought just as Him, but He didn't.  I have no right to, nor will to contradict Him.  In fact, I have called and still call several  gays friends.  I'd be there for them if they needed me, like I would for any friend.  They respect my beliefs and haven't flaunted their gay lifestyle in my face at my home.  If they had, I'd have asked them to leave, just as I would anyone who chose to do something at my home that offended my beliefs.  They have not done so when they've invited me into their home.   If they had, I'd have left, just like I would anywhere I felt my beliefs were offended.

My post yesterday, The Rainbow Abomination, was directed toward a government that has forgotten how our founding fathers framed that said government and what responsibilities and rights belong to what branch.  That things are being forced upon us by the courts instead of being voted into law by the people or their representatives.  It was also directed at the many individuals who are now expounding that "the Bible doesn't say that" or that the Old Testament doesn't apply or that we can pick and choose parts of the Bible to believe.   Directed to those that  blaspheme God by suggesting Jesus was gay or as I read several places, that a rainbow in the sky showed God's approval on gay marriage.

That is their right and I hold no ill will toward them and have no plans to reciprocate with an unfollow.   It does really make me wonder, were they objecting to the very few words that were mine, or to the The Word of God which was the bulk of that entry?  I don't know and may never know.  I will say it is called "Life & Faith" for a reason.  There will sometimes be entries from my Christian perspective.  If that offends you, I suggest you skip that entry.

I submit to you, for your consideration and reflection the following verses from the Bible, and I pray none finds them offensive.  If you do, I suggest that it is the prick of the Holy Spirit striving to convince you of your sinful attitude in order that He may lead you to confession and forgiveness.

You can read whole chapters, look up your own translation, etc. at Biblegateway.com.

20 Woe unto them that call evil good, and good evil; that put darkness for light, and light for darkness; that put bitter for sweet, and sweet for bitter!

14 Our courts oppose the righteous man; fairness is unknown. Truth falls dead in the streets, and justice is outlawed.
15 Yes, truth is gone, and anyone who tries a better life is soon attacked. The Lord saw all the evil and was displeased to find no steps taken against sin.

10 But who will listen when I warn them? Their ears are closed, and they refuse to hear. The word of God has angered them; they don’t want it at all.

10 But the Lord is the only true God, the living God, the everlasting King. The whole earth shall tremble at his anger; the world shall hide before his displeasure.

17 But any nation refusing to obey me will be expelled again and finished, says the Lord.

14 If my people, which are called by my name, shall humble themselves, and pray, and seek my face, and turn from their wicked ways; then will I hear from heaven, and will forgive their sin, and will heal their land.